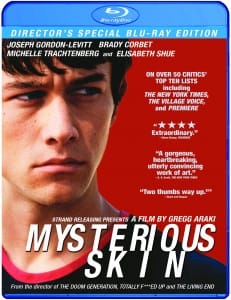 Two young men are haunted by similar events from their past, though the effects manifest themselves in very different ways, in this powerful drama from independent filmmaker Gregg Araki. In the summer of 1981, Brian (George Webster) and Neil (Chase Ellison) are both eight years old and playing on the same little league baseball team in a small Kansas town. One day, after a game, Brian blacks out after getting caught in a rainstorm, and five hours later he finds himself sitting in his basement with his nose bleeding and no memory of what happened to him. Over the years, the event — particularly the missing five hours — weigh heavily on his mind, and he becomes convinced that he was kidnapped by space aliens. Teenaged Brian (now played by Brady Corbet) becomes friends with Avalyn Friesen (Mary Lynn Rajskub), a woman who claims to have been abducted by aliens on several occasions, and she urges him to look to his dreams for patterns that might suggest what happened to him. Meanwhile, during the same summer, Neil developed a powerful crush on their little league coach (Bill Sage), who appeared to have also taken a shine to Neil. Neil’s mother (Elisabeth Shue), seeing nothing wrong with their friendship, lets the coach look after Neil while she’s off on one of her many dates, and before long Neil begins sexually experimenting with the older man. Neil’s introduction to sex inspires him to become a hustler when he grows into his teens, and after burning his bridges in his hometown, Neil (now played by Joseph Gordon-Levitt) and his close friend Wendy (Michelle Trachtenberg) move to New York, where he continues to cruise for a living but under significantly more risky circumstances. One day, Neil is contacted by Brian, who after seeing one of their team photos from their days in little league suspects he might have some clues as to what happened to him in 1981. Mysterious Skin was based on the novel by Scott Heim, and marked the first time Gregg Araki made a film that did not originate with one of his own screenplays.

This is a serious piece of work that’s even better the next day.
– Mick LaSalle, San Francisco Chronicle